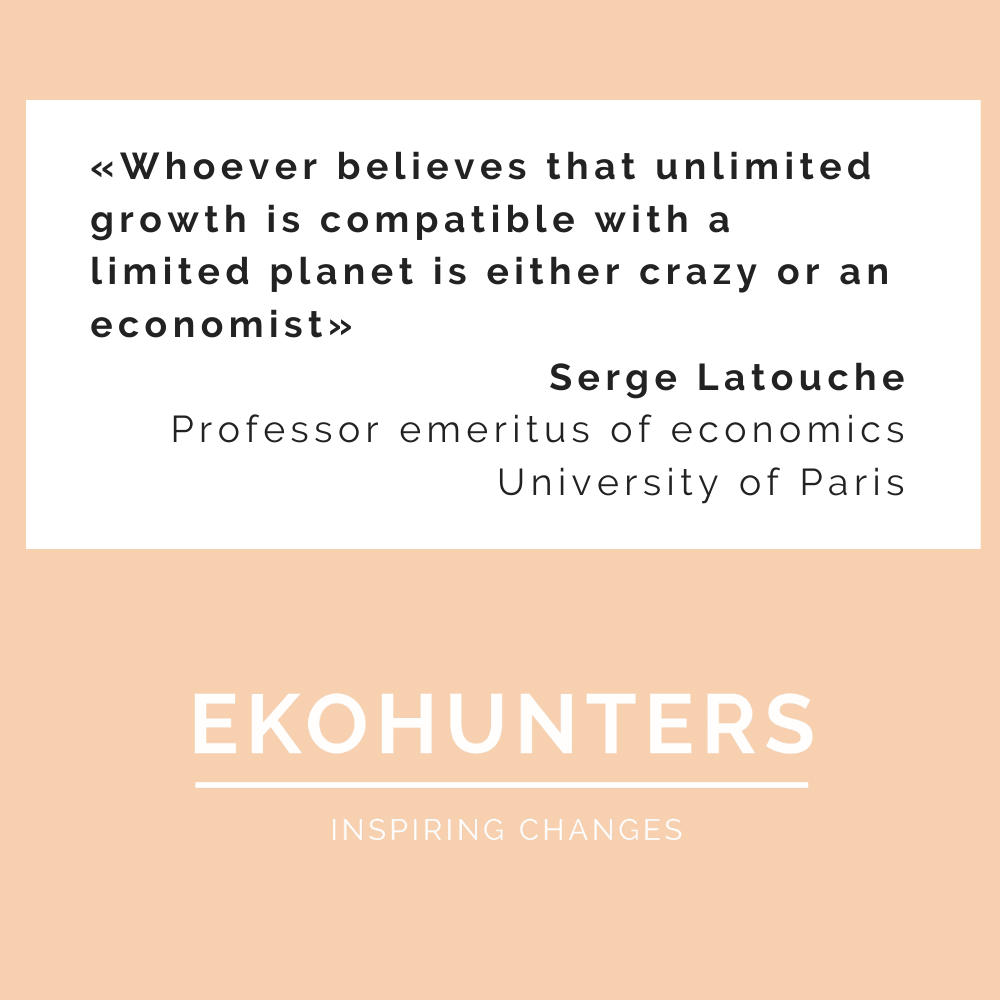 THE OBSOLESCENCE OF THE PLANET

The welfare society and in general this era of progress that the planet is living has been characterized for decades by a disproportionate consumption of resources. World society is spending and consuming resources in an absolutely accelerated and unsustainable way, specifically 1.7 times faster than the planet’s ecosystems can regenerate them.

The welfare society and in general this era of progress that the planet is living has been characterized for decades by a disproportionate consumption of resources. World society is spending and consuming resources in an absolutely accelerated and unsustainable way, specifically 1.7 times faster than the planet’s ecosystems can regenerate them. By way of example, the lifestyle of some countries would require several times the earth’s total resources to supply its inhabitants year after year. The U.S. tops this ranking with 5 times the capacity of the earth, Australia more than four, Russia and Germany three, or the United Kingdom, France, Spain or Italy with more than twice according to the Global Footprint network.

We have adopted a way of life in which consumption is accompanied by an obsolescence of the products consumed that is absolutely unsustainable. A consumption subject to fashions, a consumption based on manufacturing to throw away, which generates large amounts of waste that are not recovered with the consequent waste of natural resources.

According to Wikipedia, programmed obsolescence is the determination or programming of the end of a product’s useful life, so that, after a period of time calculated beforehand by the manufacturer or by the company during the design phase, the product becomes obsolete, non-functional and useless. A model, «buy, throw away, buy» that has subtly permeated the population and forces us to enter into an endless cycle of consumption and waste.

Programmed obsolescence arose in the 1930s, during the years of the Great Depression and the mass production model, as a way of encouraging consumption. During the second half of the century this pattern permeated the mentality of the world society that began to consider something obsolete simply because of fashion. This is the current model. The secret engine of our consumer society. An article that does not spoil with some regularity is a tragedy for business. The economy of the «annual model».

This model, the objective of which is to ensure a reiterative purchase from the design and manufacture of products with a short useful life, would be a half-hearted problem if it were not for the fact that the destination in the final life cycle of these same products is their waste. To this factor we must unite that we have constructed a model of consumption in which the «hyperconsumption» prevails, the «fetishism of the merchandise». If it is not new, if it is not the latest model, if it is not new, in short, if it is not consumption, on many occasions before what is necessary, the model does not work. But the reality is that this consumption is based on an obsolescence of a fictitious product created to sustain the economic model of unlimited growth, an absolutely unsustainable model both from the point of view of available resources, as well as social and environmental.

«Whoever believes that unlimited growth is compatible with a limited planet is either crazy or an economist.»

But this problem is not only the responsibility of the consumer and his habits, but the companies, the big corporations, have convinced us that this is the way and the most serious thing of all, is that the policies, in short the legislations participate in this model and protect it. It does not conceive of a manufacturing model, an economic model, under the perspective of finite resources. It is conceived as a perspective of abundance, in reality of false abundance. Profitability at any price.

«Our role seems to be limited to asking for credits and buying things we don’t need.

In spite of everything, there are voices, even from the governance itself, that are already drawing attention to this issue. Governments such as that of Extremadura, here in Spain, advocate «alargascencia» as a model, through a Proposal for a Law on the Statute of Consumers, which seeks to establish the prohibition of programmed obsolescence, understood as «the set of techniques by which companies deliberately seek to reduce the useful life of a good in order to increase the replacement rate».

But the text of the law is not only a question of prohibition but also advocates imposing on companies the obligation to repair service and improve the quality and sustainability of their products, also ensuring a system that guarantees a minimum life of products and extend the guarantees.

France has also been one of the countries to criminalise these practices with penalties ranging from large sums of money to even prison sentences.

– The Circular Economy as a solution.

Create products; easy to repair, recycle and with reusable materials. A Model that proposes the reduction of waste, reducing in turn the consumption of raw materials. The objective of this strategy is therefore to reduce both the input of raw materials and the production of virgin waste, closing the economic and ecological flows of resources. Sweden has been particularly involved in this model, trying to inspire changes that call into question the current model of production and consumption in order to move it towards a more environmentally and economically sustainable model that helps consumers to make climate-smart decisions.

In order to achieve this, this strategy focuses among others on issues such as:

– To make known the environmental impact of consumption.

– Disseminate examples of good consumer practices. (Creation of a forum)

– Promotion of the «economy of exchange».

It is about inspiring the change of consumption, the change of economic model and moving towards a collaborative economy of optimization of resources.

– The social commitment with the change of consumption model.

We must adopt a degrowth mentality. We must abandon the logic of excess. Reduce the ecological footprint, waste, overproduction and overconsumption. The environmental problems and climate challenges we face are intrinsically linked to our private consumption. To reduce the negative impact of consumption on climate and the environment, we must change the way we consume.

We must embrace change each and every one of us. Our commitment and our responsibility to the future of the planet, of the next generations, to sustainability in short, is the only possible solution.

The world is big enough to meet everyone’s needs but it will always be too small for the greed of some.