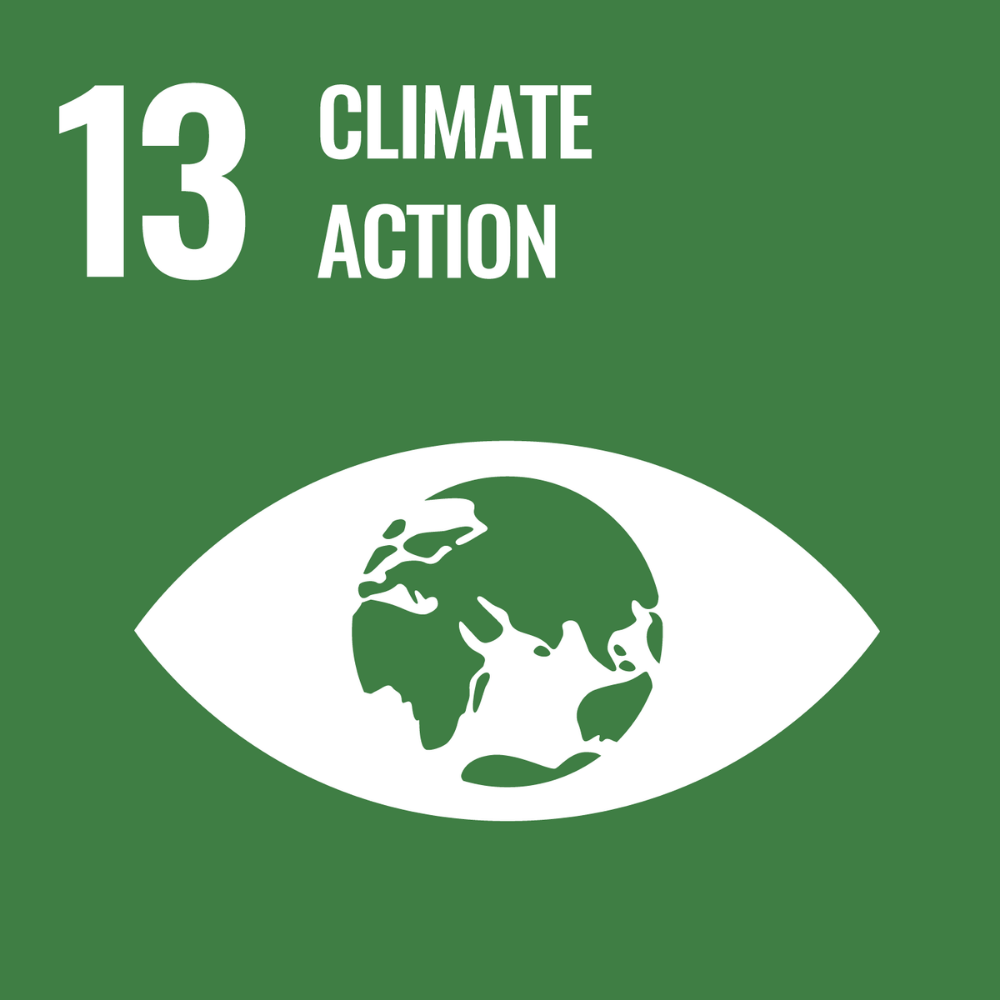 This SDG 13 emphasizes the deterioration to which we are subjecting the planet, which is seriously jeopardizing the long-term survival of the world as we know it. The consequences of this environmental destruction, the changes that are taking place and the repercussions that this will have, some of which have yet to be discovered, should be a wake-up call enough to take the necessary measures to halt this destructive frenzy with unpredictable results.

2020 has been the hottest year in Spain since we have records. (1.7 degrees of temperature increase). In global terms the annual range 2015-2020 were the warmest years ever recorded and the decade 2011-2020 the warmest on record to date.

This climate change, a consequence of our lifestyle, especially related to our energy model (fossil fuels) and consumption among other major factors, is changing the planet and its climate regime with dire consequences for the planet and its inhabitants. Increasing fires, hurricanes, catastrophic storms, rising ocean temperatures and their terrible effects (loss of sea and land ice, rising sea levels…), more frequent, longer and more intense heat waves and significant changes in the habitats of plants and animals.

Greenhouse gas emissions from fossil fuel consumption continue to increase despite scientific evidence that they are the main cause of global warming and therefore of climate change. Despite this clear warning, greenhouse gases are currently 50% higher than in the 1990s.

According to the United Nations Development Program, sea levels have risen by an average of 20 cm since 1880 and are expected to rise by between 30 and 122 cm by the year 2100. The Paris Agreement to reduce the average global temperature to below two degrees Celsius is only one third of the reduction measures needed to reach this two-degree figure. Despite this, we continue to discuss its suitability from social and political positions that are absolutely stupid if we take into account what is at stake. The political selfishness and foolishness of international governance knows no bounds.

Limiting greenhouse gas emissions to 1.5º C. must be accompanied by a 45% reduction of these gases by 2030 and achieving decarbonization (zero emissions) by 2050. Ambitious perspective taking into account the total lack of commitment and social and political responsibility in which we live and the current economic model, the cancer of neoliberal capitalism and its exponential growth that is leading us to collapse without remission.

The consequences of doing nothing in the face of this global crisis have, and will have, enormous implications for the entire planet, with the consequences becoming even more extreme as time goes by:

•The emission of greenhouse gases brings with it an increase in temperatures, which is already producing more intense and more frequent extreme weather phenomena. Droughts, increased fires with the consequent deforestation and desertification that accompany these phenomena are the visible consequences. Rising temperatures also mean a higher and more intense precipitation rate with an increase in catastrophic flooding phenomena.

• The vast majority of the world’s population lives in the temperate zone. Rising temperatures will bring with them the spread of diseases to latitudes where, due to warmer temperatures, they did not occur, with a consequent increase in loss of life.

•The increase in temperature means the melting of glaciers and polar ice caps, rising sea levels, diminishing water basins but above all, losing an important supply of drinking water for people in many areas of the planet.

• All these changes will undoubtedly produce a serious modification in the ecosystems with an evident loss of biodiversity, thus increasing the extinctions of animal and plant species all over the planet.

• All these extreme climatic phenomena make, and will make even more so in the future, many of the current cultivation areas unviable. A very serious problem considering the current population growth. Climate change endangers the production of staple foods such as wheat, corn or rice… three foods that directly or indirectly feed a large part of the world’s population. Hundreds of thousands of people will lose their livelihood. In addition, if food becomes scarce, prices rise, poverty and hunger worsen. Social conflicts and wars increase.

• As a consequence of the deterioration in living conditions brought about by this climate crisis, many of the planet’s inhabitants will be forced to migrate. Climate migrants are, and will be in the future, another great challenge that we will have to face, especially in developed countries. These climate displaced persons will represent a major humanitarian crisis that is already beginning and of which we are already becoming aware at this moment.

• These are just some of the effects that climate change is already having due to global warming resulting from the burning of fossil fuels and our lifestyles. But this has only just begun. If we do not take the necessary measures, these consequences will worsen exponentially in the coming decades, condemning future generations, and perhaps at this rate of change also our own, to a planet with no prospect of survival. The reversal of the current model is unquestionable. The necessary change is indisputable.

The fight against the advance of climate change, in favor of its retreat, is, in light of all these facts and its future aggravation, vital for the survival of the planet and its resources as we know it. The deforestation and disappearance of ecosystems, the loss of marine-coastal resources, the depletion of natural resources are just some of the impacts of climate change on the planet that clearly show the seriousness of the consequences of this crisis if we do not put a stop to it.

In this regard, political and social awareness of the scale of the problem is of paramount importance. Coordinated political action by national governments and supranational governance is needed to take the necessary measures aimed at changing the economic and social model. To point out that social awareness of the true magnitude of the problem is a primordial issue in order to achieve real progress in the adoption and implementation of a change of model that abandons an economic and production system based on fossil fuels and embraces a clean energy model and sustainable production strategies. To this end, it is absolutely necessary to educate and raise awareness among all social actors on climate change mitigation, adaptation or reduction of its effects.

However, we cannot leave aside the international geopolitics that, to a large extent until today, only hinders or is part of the problem and not part of the solution. The economic interests of this fossil neoliberalism that dominates the planet and puts exponential growth, plundering, the wealth of a few above the future of many and the sustainability of the planet, is leading to a worsening of the climate crisis and less time left to reverse it.

We need a real commitment with real mitigation measures and not minimum agreements to cover up the lack of commitment and mask the real interest, which is none other than to protect an obsolete, unfair and above all unsustainable socio-economic model. 1º,1,5º,2º, this dance of figures is only an instrument at the service of pyrrhic agreements that do not get us out of the problem, they only postpone it: We need a deep reflection, deep measures that imply a change of system, of model, real and deep measures that transform society and the planet under the values and principles of sustainability. We need it now! We do not need more negotiations based on figures that only hide a palpable lack of commitment and responsibility.

The energy transition, decarbonization, changing production models, transforming the consumption model, sustainable resource management, raising awareness and citizen commitment to environmental protection actions, recycling, reuse, local consumption… Mobility and the transport model… adopting strategies such as the circular economy and eco-design, urban planning… all these issues, among many others, are directly or indirectly involved in global warming and its consequence, climate change. All these issues must be addressed now and in a spirit of change, of transformation. We have to rethink our way of living, of interacting with the planet before the planet says enough is enough and we are driven without remission towards a climatic and irremediably human disaster. Something that we are getting closer and closer to!